History of the Jerome Fire Department

Jerome is a town born from fire. 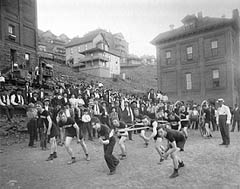 In 1876 copper was discovered by American pioneers on the steep hillsides of Mingus Mountain in the wild, untamed reaches of the Arizona territory. Claims were registered immediately, and a rough and tumble mining camp was quickly established.

As was the case in many of the early mining camps in the wild west, no thought was given to any long term planning. The only plan was to get the ore out of the mountain and to market. Men dreamed of riches and gave little thought to anything else. As a result, only the most temporary of structures were built at the camp. This situation created extemely dangerous fire conditions. And fire, given half a chance, will exploit those kinds of conditions. Inevitably, the mining camps was devastated by a series of fires in its early years.

Four fires in the late 1890’s alone were sufficiently devastating to be placed in the category of disasters.

Jerome’s conflagrations occurred in rapid succession. There were many conditions that existed at the time which contributed to Jerome’s ability to burn so easily: pine buildings, some covered in canvas; structures packed closely together on a steep hillside; the use of kerosene lamps and wood burning stoves with clay and wood chimneys. Other factors which contributed greatly to the fires were quoted in the local paper as wind, lack of adequate water supply, and alcohol consumption among the populace.

This formula for disaster produced a series of destructive fires. After each burn, citizens lived in tents while reconstructing the their structures only to have them burn again. In 1897 a madam of one of the houses of pleasure ran into the street in a panic and offered free business to the entire fire department from then on if they would save her house. Her house was saved.

Bill Adams, editor of the Jerome Mining News, remarked that he might as well have left the type set up for the next big conflagration, “Jerome Burns Again.”

In the late 1890’s the town was devastated by one conflagaration after another: 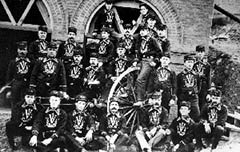 After the 1899 fire consumed buildings freshly rebuilt from the last two fires, the burnt out mining camp organized and decided that in order to protect itself from further conflagarations, it must incorporate as a legally recognized town.

The Yavapai County Board of Supervisors granted incorporation in 1899.

The new town council acted promptly to correct the woeful lack of an adequate supply of water and fire fighting equipment. Incorporation allowed the citizens to collect taxes in order to raise the money to erect water tanks, bury fire lines, construct a fire station, outline a fire district, and adopt one of the first building codes designed to lessen the occurrence of fire. The new code didn’t go very far; its main provision was to compel the construction of stone or brick fire places and chimneys and prohibit tents. Fortunately, it did allow for the creation of the Jerome Volunteer Fire Department.

Jerome was still susceptible to fire, however. Fires that occurred in later years include: 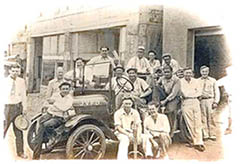 Through the years that followed, the Department continued to develop by acquiring new members and equipment. The town itself went through cycles of boom and bust. In the early thirties, at the beginning of the Depression, the mines closed down, and many people had to move to other parts of the state and country in order to find work. In 1934 Phelps Dodge took over and began extensive blasting less than a half of a mile from Jerome’s commercial district. This blasting, sometimes amounting to as much as 225,000 pounds of dynamite at one time, shook the town down to its foundations week after week. Eventually, one whole block of Main St. on the downhill side slid so far down the hill that all of the buildings had to be dismantled. These structures included a J.C. Pennys, a full size movie theater, a drug store, a billiard parlor, a general store, and a barber shop. No structures have been built in the slide area to this day.

During World War II there was a brief boom in copper prices and the town prospered briefly, but when the war ended, copper prices collapsed, and it was no longer feasible for mining to continue. The quality of the ore coming out of the mountain was of an inferior grade, and Phelps Dodge ceased operations in 1952.

It was at this point that Jerome became one of the most famous ghost towns of the American West. From a population height of 15,000 in the twenties, by the middle fifties there were only a few people who were still calling Jerome home. This ghostly condition lasted through the fifties and through most of the sixties. During this period the Fire Department fell into disrepair because of the lack of active members. Fortunately, during this period the town must have been under a certain state of grace, because no devastating fires threatened the town, as in the past. In the late sixties, the town was discovered by members of what was then called “the Counter Culture”. Young people moved to Jerome from all parts of the country, bought houses for next to nothing, opened shops, started businesses, and, in general, started to restore the town. 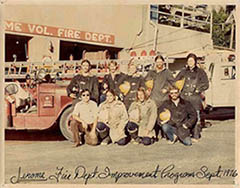 In the early seventies, a group of these young people (both men and women) joined the Fire Department and starting working to bring the department into the modern age. Slowly but surely newer equipment was acquired. Training was brought into the modern age. A Prevention program was initiated. An Emergency Medical Service group was formed. Recruitment swelled the ranks, and by the early eighties, Jerome once again had a Fire Dept. that could deal with emergencies in an efficient and professional manner. And, like the majority of fire departments around the country, it was an all volunteer organization.

During this period, the town and the department were fortunate to have a fire chief whose leadership paved the way for the Jerome Volunteer Fire Department to become one of the most respected departments in the region. David Hall served as Chief from the early eighties until June of 2001. Under his leadership the department evolved into a modern, well equipped, well trained unit with a selfless team spirit that allowed it to handle various structural and brush fires during the eighties and nineties that, in the past, might have burned large sections of town. 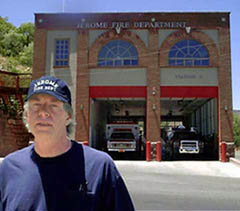 In the middle nineties the department obtained, through a grant, a custom built Pierce pumper with a short wheel base, low geared rear-end, and transverse engineering deck.In 1998 the Department acquired a new station in the uptown area with the help of a Community Block Development Grant, sale of ten acres of Town property in the Verde Valley, and fund raising efforts by the community through the auspices of the Jerome Vol. Fire Dept. Aux.

Since then, the department has continued to upgrade its services. It established a rope rescue team to deal with rescue calls up on the mountain above town and those of neighboring agencies. It has acquired a new Compressed Air/Foam pumper (again, through a grant) for structural and wildland fires.

The current membership honors the colorful tradition of the Town of Jerome and its Volunteer Fire Department. In 1999 the Department was officially one hundred years old and to this day is still going strong.